We usually send trekking reminders to help you in packing. If you’re a team leader of your group, you have to ensure that info is properly disseminated among your team to help them pack the necessary things. Most of the time, Team Leaders were blamed by their members on the final trek date because they failed to forward or discuss these important reminders.

PACK YOUR THINGS RIGHT & LIGHTIt’s really a no no to pack things as if you’re going in a holiday abroad. Please note that you are going to a mountain so please don’t bring bulky baggage because it would make your trekking difficult & tiring. Pack only what you need. You may prepare 2 bags, the back pack that you will bring when you climb & small bag for things that you will use after the trekking. You may leave this at the dispatching area, in your car or in a paid locker with key.

Please use medium sized back pack. It’s just a one day trip so the lighter, the better. Just limit your baggage from 3 to 4kilos.

You may bring the following:

Please don’t bring valuables/jewelry during trekking. Most of our clients lost their mobile phones, jewelries or watches either at the trail, when they swim or during shower. Some cases, while applying sunblock, they will remove their watch or bracelet then forget it afterwards. There is no assurance that you can recover lost valuables so please leave it at home/car

Furthermore, you need to cover your things, mobile phones, wallets & camera or any other electronic gadgets with zip locked plastic to ensure safety. Please note that some of my past clients who disregarded this particular reminder were caught in the midst of heavy rain as they descend from the mountain and their cams & phones were soaking wet.
You may pack using small bag/plastic bag for the following and leave it in your car or paid locker

The principle, “the lighter, the better” is the rule of the game.

Footwear will depend upon your preference but as per experience, the most convenient & safe are rubberized footwear such as crocs type of footwear. If you prefer to use trekking sandals such as tribu or sandugo, we strongly advise using socks to protect your feet from blisters. This happens most of the time. Don’t forget to bring an extra slipper, this is mandatory because if your shoes, failed you then you still have an extra footwear and will not walk barefooted afterwards. 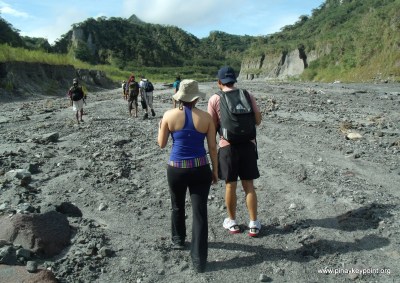 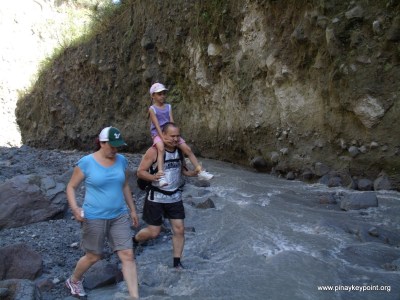 Over the years, since it’s eruption in 1991, Mount Pinatubo gradually change its features and turned into a beautiful tourist attraction. It never fails to amaze tourists from different corners of the world  by its Majestic Beauty.

The photos below are taken during our numerous expeditions. We are covering each tour and web albums are created for each group of clients. These photos are uploaded in a paid storage of our Picasa Account. Every Month of each year, we noticed that the crater lake gradually change it color. At times it is muddy, murky green then will turn into turquoise after several rains. According to Philvocs which usually conducts a routine check in the area, this color change is weather dependent. We are posting some photos from our gallery of Trips and this  will show us how Mount Pinatubo Cater Lake changes its color and feature over the years. 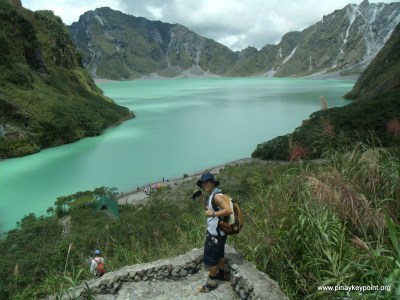 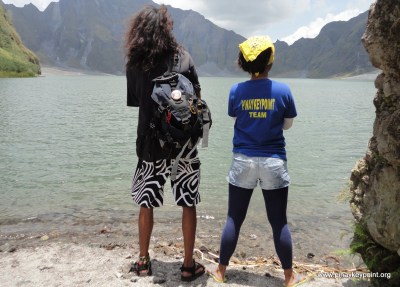 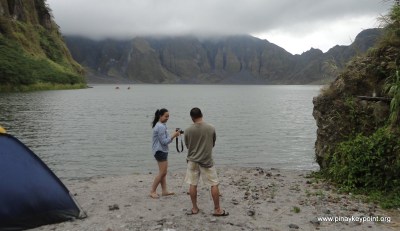 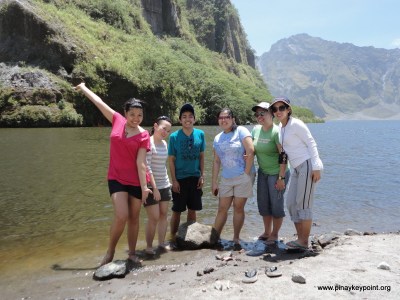 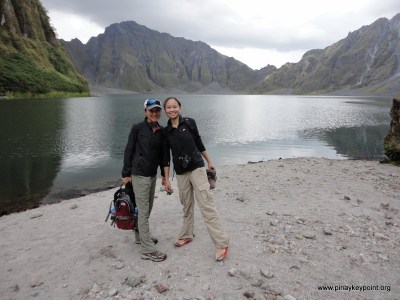 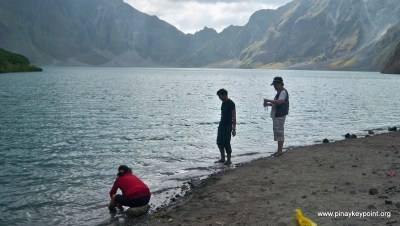 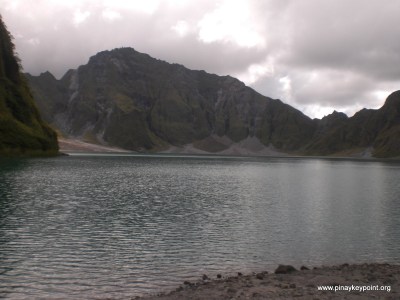 Due to overwhelming response of my readers to my Mt. Pinatubo Post, which also becomes my no. 1 post since I started blogging, we added another service in our homebase business. This is Tour Guiding Services

My hub and I has particular task in running the business. With IT related works, I am in-charge of the internet, design and documentations while hub is doing the field work. But when the need arises, I also assist hub with field work activities.

Recently, I have many inquiries in my inbox particularly Mount Pinatubo Trek. I used to have a computer shop at Capas Tarlac and Tarlac Municipal Tourism had been one of our clients. I designed and created the Identification cards for Mt. Pinatubo Tour guides and most of them are Aetas. I also designed banners, flyers and brochures.

Last week, 2 clients from the internet hired our service thru this blog, Greg and Wisnu. Greg arrived last week but he went to Puerto Galera first and he scheduled trekking on Saturday, Dec. 13. Wisnu Wijaya, an Indonesian based in Malaysia arrived last Dec. 9 at 5:30pm. Hub meet him at the airport. They arrived home at almost 10pm. Although we had an agreement that we will book him in a hotel but because we were so excited sharing each others’ experiences, he decided to stay with us. Our house suddenly turned into a transient home.

The next day hub included Wisnu in the group of trekkers bound to Mount. Pinatubo. 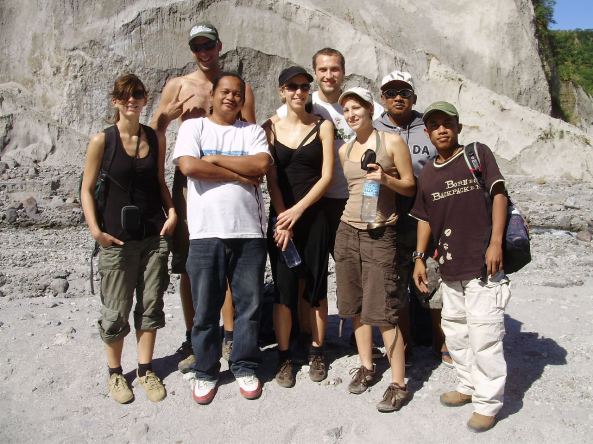 Hub (in white shirt) with Wisnu and Mt. Pinatubo trekkers 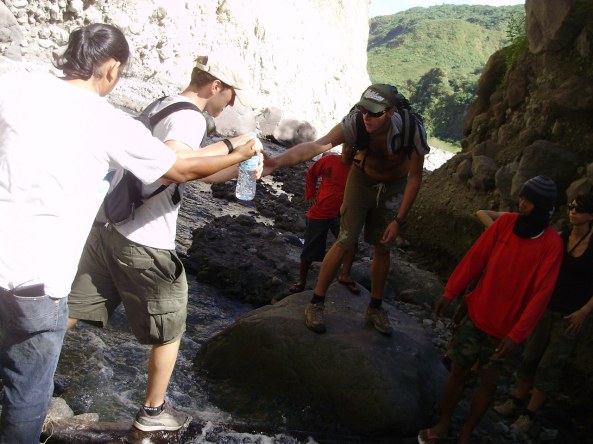 Hub during the actual trek 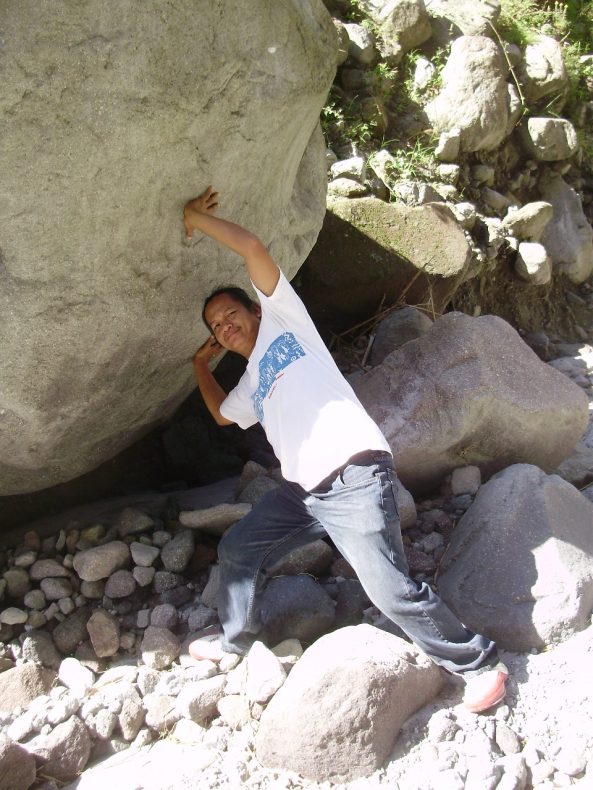 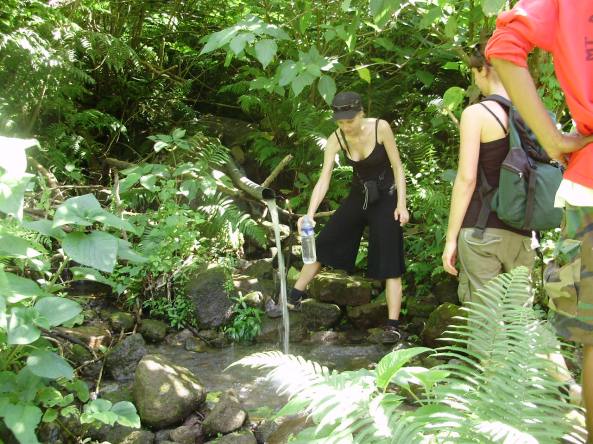 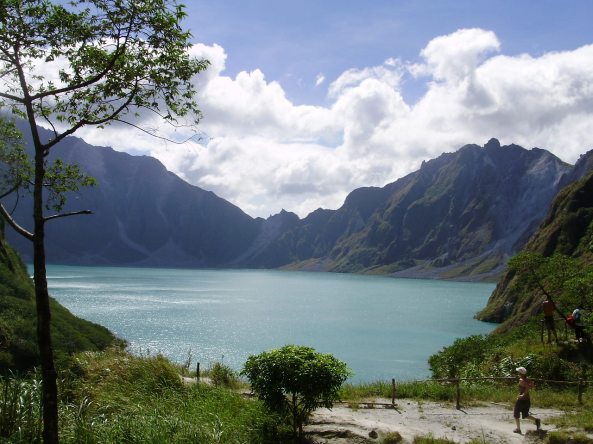 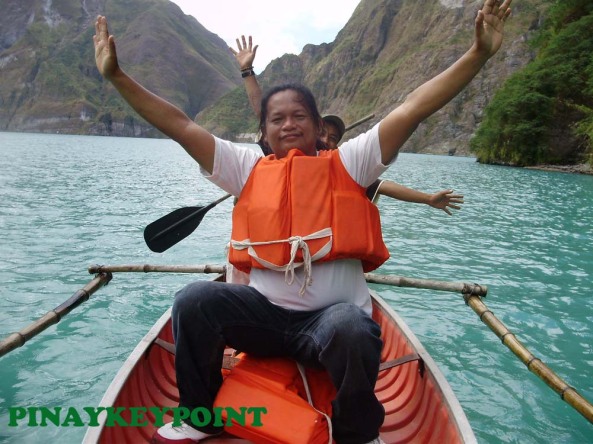 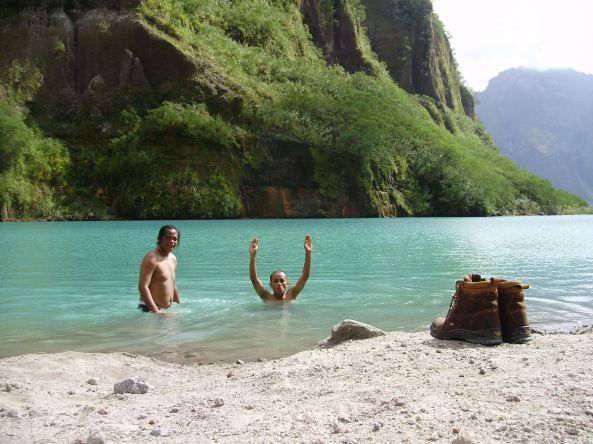 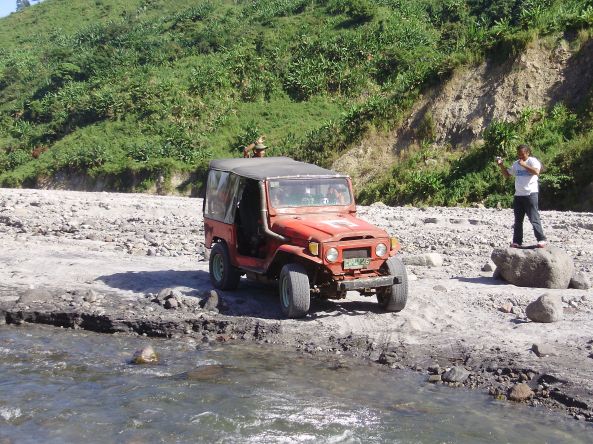 4 x 4 wheel drive, the only transport system that would survive rocks and boulders 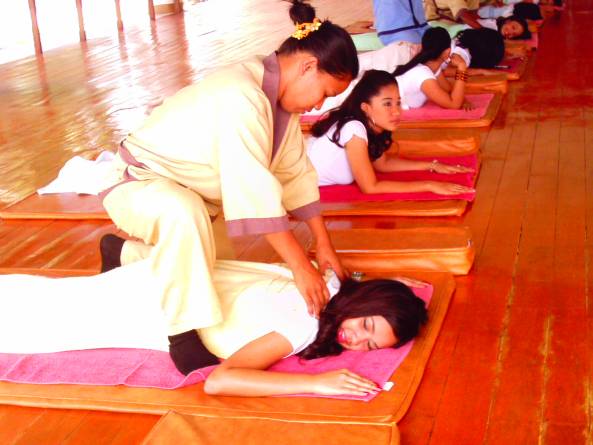 After a tiring day, sooth your muscles and enjoy full massage spa

What are you waiting for? experience a once in a lifetime trekking adventure at Mt. Pinatubo Philippines. You can come in group or you can trek alone with native tour guide.

For more inquiries, leave your comment here or email me pinaykeypoint@yahoo.com

WE ARE NOW ONE OF THE MOST TRUSTED TEAM IN THIS FIELD.

THANKS GOD FOR MY BLOG AND FOR THIS POST;)

I am not a Tarlaquena by blood. I am here because I was relocated here by the company where I worked 18 years ago.

I am a Bicolana by blood and left my hometown to work in Manila. My 3rd job was at Kawasaki Motors Philippines and after 2 trainings in Japan, I was transferred as pioneer employee to Tarlac to train the newly hired employees. I was only 20 years old then and single, probably that was the main reason why I accepted the relocation; I have no family to worry of.

Tarlac then was a typical province, no sign of progress. The road to my company- IWSPC (Int’l wiring Systems Phils. Corp) was a rough road. IWSPC was one of the first locator at Luisita Industrial Park, it is a Special Export Processing Zone located at San Miguel, Tarlac City Philippines. In my previous post about Mt. Pinatubo, I shared my experiences regarding my first days in Tarlac. I deal with loads of ashes lol!

I don’t know how I endure living here, maybe because I met my hub here lol! But Progress came to us after 5 years and the old place with tall grasses and trees turned into a beautiful park. And the pictures below will show you the progress of once a sleeping province. 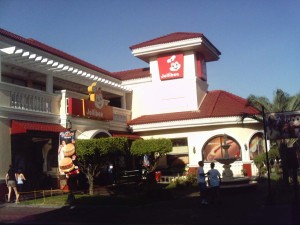 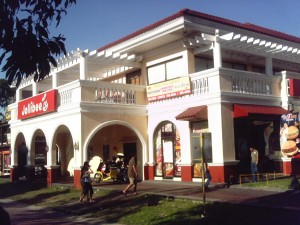 This is the famous Jollibee, a pure Filipino food chain. This has many branches nationwide and already reached the tongue of different countries including America. My kids loves this place. Sabrina, Rajisha and my youngest son Nonoy celebrated birthdays here. 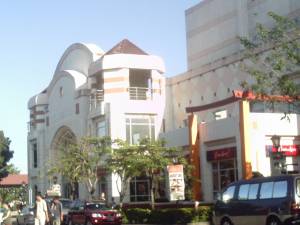 This is Luisita Mall. I took some pictures for souvenir. You’ll never see this building again in the coming months for it is undergoing construction. Robinson Mall will occupy the site. 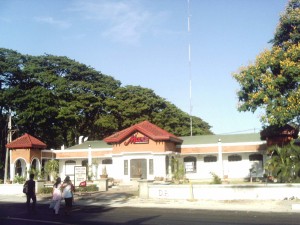 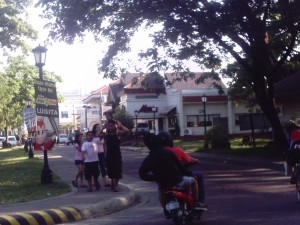 These picture were taken inside Luisita Park. That building is Max’s restaurant, one of famous Filipino restaurant that specializes in fried chicken. I love that place. Rajisha and Nonoy’s baptismal party were held here. 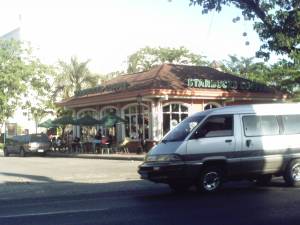 This is Starbucks, yes we also have a branch of that famous cafe here. This is a hotspot so if you want to enjoy free unlimited internet surfing while sipping your favorite blend of coffee, this is the place to go. I bet you also love this place. 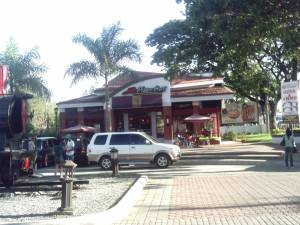 This is Pizza Hut. In case you want a delicious pizza, that is also available at LIP park and of course, there is Greenwich too but because Luisita Mall is under construction, they moved temporarily near Maligaya Variety Store beside 7 eleven, infront of Camp Servillano Aquino. 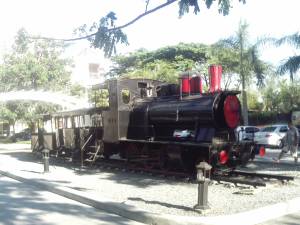 Yes, this is a genuine train. A century old train used at the Sugar cane Plantation owned by Cojuangcos. It now turned as one of the Park’s attraction. 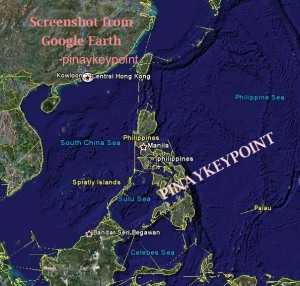 At a brief glance at the map, you will notice how strategically my country is located with reference to Southeastern Asia and the Indonesian Islands.

Our Archipelago guards the approach to these regions by sea from the North and from the East. This is both a handicap and an asset to us Filipinos.

A Handicap to us in case war involves nearby countries, as powerful nation with plans to launch war against them may attempt to conquer our country first so they can use us.

We had learned this disadvantage during the second world war. At the same time, the Philippines strategic control over the northern approaches to the China Sea, and indirectly over the eastern approaches to the Straits of Mallaca, has advantages too. It adds to our Political importance among the nations of the world and above all, it makes Philippines commercially, an ideal center for the distribution of goods throughout Southeastern Asia. The Philippine archipelago comprises 7,107 islands. The total area of the Philippines is 115,600 square miles. I will share to you the poem I composed for my homeland.

A TRIBUTE TO MY DEAR LAND PHILIPPINES

Our land was so rich and green
We have our gold, our seas and mountains
We have nothing to ask for
Everything is provided by mother nature
Then a galleon came with these foreign men

By their power, they took everything
Our land, our gold, our freedom
Our forefathers were divided
By their sword and cross, the Pearl was conquered

For 300 years they had stayed
Our ancestors became slaves
Our great grandmothers were raped
Millions of our fellowmen were killed
And all over the land, their blood had been scattered!

Then a cry of freedom rang In the ears of Balintawak!
Our Great father had stand and urge us to fight
With his bolo and great bravery,
He shouted:”We have to fight for our freedom!
We have to freed our land!”

We were almost there but then we were divided again
Some of our forefathers stood
On the side of these foreign men
By their selfishness we were weaken
Until we were conquered again.

The kind of sufferings that we experienced from these Whites
Will never be forgotten as long as we live
Millions of casualties, cities were destroyed
Their flag were victoriously hanged
Above the Pearl that mourned

While the Pearl was mourning
Another battle hits again
This time the Tiger Japs
Snatched the Pearl from Whites
By their bayonets, the land was bathed by blood.

As the Japs were cornered, the Whites suddenly entered
Because they claimed that it was their promise
To return as Mc Arthur said
The wise whites had shared with us
The victory that must be ours.

My dear fellowmen Do we really gain the freedom?
Which been long so much by our motherland?
Do we really escape from the clouts of these Whites?
Who conquered us during those early times?

The Echo of Balintawak
Can still be heard in the wind
The way they shouted for freedom
Was like a thunder in the mountains
The cry of our forefathers were like a storm and hurricane!

Did you feel my anger in this piece?

This poem was posted in our company newsletter and a local magazine.

I was very active as a labor union leader when I composed this piece. I was one of those who march on the street with clench fists asking to make a difference…